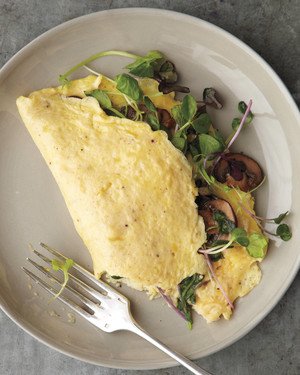 Directions
Using medium-high heat, melt half the butter in a small nonstick skillet. Let mushrooms cook undisturbed, until they begin to release their liquid after about 2 minutes then season with salt and pepper, and stir. Cook until golden brown, about 2 minutes more. Transfer mushrooms to a small bowl and stir in microgreens.
Whisk eggs in a separate medium bowl until well combined and season with salt and pepper. Wipe skillet clean with paper towels and melt remaining butter over medium heat to coat the pan. Pour eggs in the skillet and cook undisturbed until edges are set slightly. With a heatproof flexible spatula, push eggs from edge toward center while tilting the pan to let the uncooked eggs run underneath until the omelet is just set after 1 to 2 minutes. Place mushroom filling on 1 side of the omelet. Using a large spatula, gently fold the other side of the omelet over the filling. Top with more microgreens and serve immediately.

Shopping Cart
There are no products in the cart!
Subtotal
$0.00
Total
$0.00
Cart
Checkout
Continue Shopping
0